Murder Comes To the Capital! 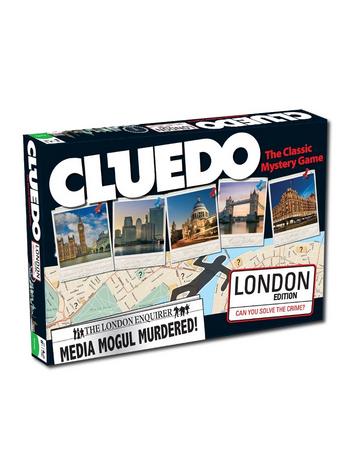 As a family of 5 we love to play board games to keep us all amused especially on Christmas Day. We have never played Cluedo before so when we had the opportunity to review the London Limited edition board game we couldn’t wait for it to arrive as we live in greater London we spend so many days out in the City that we was looking forward to playing the game with some of the famous landmarks that we have visited plus i love a good murder mystery.

Winning Moves the innovative games company behind many of the classic family favourites such as Top Trumps and Banangrams have revealed the new Cluedo game: London edition! The game has been given an urban makeover and has now been allocated to the big City London, featuring new murder scenes – St Paul’s cathedral, Soho, Tower Bridge, The Houses of Parliament, Knightsbridge, Canary wharf , Covent Garden, Heathrow and Wembley. The weapons have been kept the same: the candlestick, dagger, lead piping, revolver, rope and wrench but the characters have replaced with:

Malcolm Mustard the Mayor – Successful and respected, but is the tide beginning to turn

Paul Plum the Journalist – Always hungry for the next scoop, but to what lengths will he go?

Gus Green the Footballer – Talented young sportsman consumed by greed, can he live with the shame?

Penelope Peacock the Socialite – With her life rebuilt, can she take a second heartbrake?

Sally Scarlet the TV Scarlet – Talent show winner clinging to fame! How will she stay in the headlines?

Winnie White the Therapist – The eternal shoulder to cry on, did she misread the signals?

The traditional millionaire victim has been replaced with a ‘media tycoon’ victim Barnaby Black. Barnaby is found dead on a Saturday night on the banks of the River Thames, the cause of his death is unknown but foul play is suspected and the police begin to investigate, with a list of six suspects (above) and nine locations they search London looking for clues and discover who murdered Barnaby Black, what with and where the murder took place!

The board game comes with an how to play sheet, the case sheet, 1 gameboard, 6 coloured pawns, 6 miniature weapons, 6 suspect cards, 6 weapon cards, 9 london landmark cards, 1 pad of detective notebook sheets, case closed envelope and 2 dice. It is easy to set up and the instructions on how to play the game is easy to follow. I played the game with my 10 year old and we got on just fine, We chose our coloured pawn and placed them on their matching starting places on the board, with the weapons in place and the suspect, location and weapon card placed into the case closed envelope we was ready to get solving. We both thoroughly enjoyed playing the game and we talked about the landmarks and our memories of visiting them. After making quite a few suggestions on who dunnit, where and what with Jak thought he had the answer to the murder so he made an accusation. I proved him wrong with his accusation and won the game 🙂 We had lots of fun playing this boardgame and would recommend it to any family for that special family bonding time.

With over 300 possible murder combinations in the new game, cluedo London promises hours of fun.

Cluedo:London edition is available to buy now on the high street from  a wide range of retailers or can be bough online from www.winningmoves.co.uk/shop

We was sent a boardgame from LSMedia for review purposes only.